On 15 June 2009, one of the most important changes occurred in the SEO field. Matt Cutts (head of Google`s Webspam team) announced that Google no longer treats nofollowed links (<a rel=”nofollow” href=`…`>) in the same way.

In this article we will explain what PageRank Sculpting is and what changed in Google`s Algorithm. Briefly we will suggest a PR Sculpting technique that is analyzed in the article “PageRank Sculpting: You can still use nofollow“, thus experienced SEO Engineers should read directly that article.

Mainly in this blog post we will try to answer the following questions:

Google more or less used to discourage the PageRank Sculpting techniques. From their point of view the SEOs were messing with their algorithm. In their documentation, in several events and in some blog posts they mentioned that they do not suggest using those techniques because a) they are not as effective as we think (they are time consuming), b) in some cases they can do more harm than good (nofollowing by mistake important information that users need to find).

On the other hand many SEOs found that PageRank Sculpting is a very good technique and that the rel=”nofollow” attribute was a very good tool that helped them to speed up the process.

By using PageRank sculpting techniques we try to change the way that PageRank flows within a site. In many cases most of the incoming links of a site point to the homepage and thus this is the page with the highest PageRank. The PageRank of the homepage then flows to the other pages of the site because of the links. In some cases, many pages are not considered as important as others (for example: contact pages, disclaimers etc) and thus we do not want to pass any PageRank juice to them. In order to do this we have to block these links. One of the methods we used was adding the rel=”nofollow” attribute in the links (there are several others: Flash, Java, Javascript, iframes, etc).

What changed in Google‘s algorithm?

Important Notice: The PageRank value that you see on Google toolbar is not the real rank. The actual score is not revealed by Google. Generally we consider that the toolbar scale is more or less logarithmic.

Let`s see how Google used to treat nofollow attribute at the beginning.

Suppose that you have a site with 4 pages. The homepage has 6 points of actual PageRank and there are 3 links that point to the internal pages. By using the original PageRank each internal page will receive 6/3=2 PageRank. 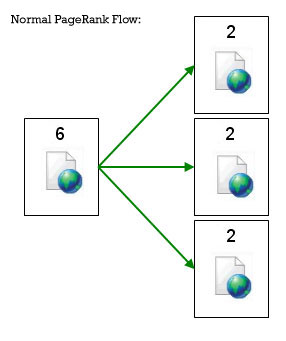 In the past if we blocked a link with nofollow, the 2 followed pages would get the PageRank of the blocked page. 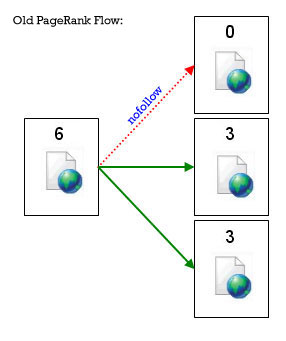 Unfortunately now Google handles nofollow attribute in a different way. By nofollowing the first page it still gets PageRank 0, BUT the other 2 pages gain no PageRank. This causes a PageRank loss. See the image below: 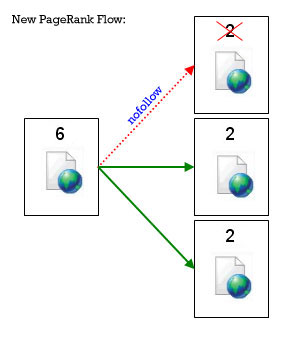 Is it still possible to do PageRank Sculpting? Can we use nofollow? (Yes we can)

Matt Cutts mentioned in his blog that “More than a year ago, Google changed how the PageRank flows…“. I partially agree with the above as I am positive that in the last year wherever we used the nofollow attribute we saw good results. Perhaps the results were not as good as they used to be on the past, but still the websites that used PageRank Sculpting techniques had better PR flow than the ones that did not. But that’s not the point.

The main question is if we can still do PageRank Sculpting without suffering PR loss. First of all let`s make it clear that the above technique is not something new. The nofollow attribute introduced in 2005, but the PR Sculpting is something that SEO Engineers did long before 2005. It used to be much more time consuming though because the other alternatives (javascript, iframes, flash, java etc) were not as straightforward as nofollow.

So we could say that rel=`nofollow` was a tool that was generally used for this purpose because of its simplicity. Thus the problem in these days is that the SEOs lost one of the most useful tools for PR Sculpting.

Or they did not?

The solution that WebSEOAnalytics suggests is a little bit tricky but very easy to implement and reliable. What if we continue using the nofollow attribute in our code and just before we send the HTML page to the user we convert the nofollowed links into something else?

The solution to your problems is the webSeoAnalyticsLinker. It is free script that replaces the nofollowed links with javascript functions by using Regular Expressions.

Because of the fact that Google is able to parse basic javascript code, in order to block it we use:

For more information check the article “PageRank Sculpting: You can still use nofollow“. You can download the script here: webseoanalyticsLinker.zip

All you need is to add the code in your pages. This will automatically convert the rel=`nofollow` links in to <span> that use javascript. You can find the installation instrunctions in the above article.

The webSeoAnalyticsLinker helps you to continue using the rel=`nofollow` attribute in your code and be able to perform PageRank Sculpting in the way you did before. It can be installed in every site with minimal effort and solve the rel=`nofollow` problem once and for all.